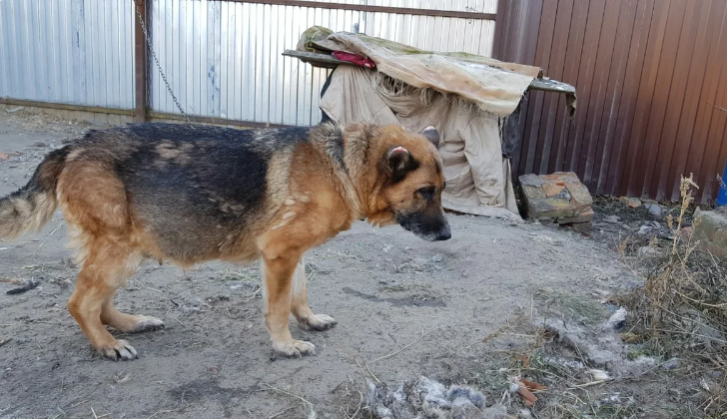 In one Kursk group on the social network, a publication appeared that left no one indifferent, but only in words. The post was about an old and sick German Shepherd Yara. It turned out that the owners did not feed and did not treat the dog, despite its serious condition, and they did not even let it into the house to warm up, although its illness arose precisely because of the cold and constant being on the chain. And this is such a gratitude for the faithful service for 13 years. The owners simply «wrote» her and found her a young replacement. 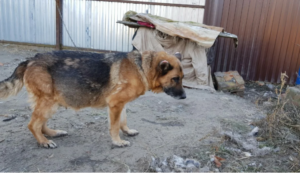 This became known to one woman. Then she began to visit Yara in order to somehow help her. However, without a veterinarian, all her efforts were in vain. When the woman brought Yara to the veterinary clinic, everyone was shocked, because even homeless animals look better, and her condition suggested why she was still alive. The poor animal did not cope with a small need for weeks. Yara just couldn’t.
After visiting the veterinarian, the woman returned the dog to the owners and thought to take it to her yard, but this was no good, because treatment under such conditions would not have brought results.

Volunteers joined in and began to think about how to save Yara. First of all, they decided to get acquainted with the dog. They saw that the dog did not even have a booth, but a dilapidated wooden box, and there was no food or even water nearby. The animal sat on a chain, Yara moved with difficulty and looked at people with unhappy eyes. The volunteers could hardly contain their emotions at this look. The pet immediately began to make contact, probably hoping that they would help her. 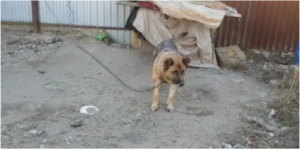 The owners of the shepherd dog behaved indifferently, as if it did not concern them, and when asked to let Yara into the warm corridor for the duration of treatment, they began to say indignantly, they say, if you need to, then take the dog and take care of it, and she has nothing to do in the house, she not needed, because there is no longer any sense from it.

The girls did not know what to do, realizing their impotence, since there was no one to take care of the sick Yara, there were no funds, there were no curators, and there was no overexposure. Then they decided to contact me. I could not refuse, because I was very sorry for the dog. Why does she endure such agony in her old age? 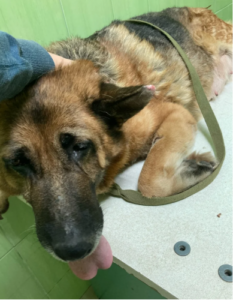 It’s also problematic for us to come up with something with a warm overexposure, and I didn’t know how to solve it. She was able to agree that she would be kept in a hospital in a veterinary clinic for several days. I paid for all the services for treatment yesterday, bought good food, because she cannot eat dry food, a bowl, ammunition, the girl brought diapers today.
Yarochka accepts everything with such gratitude, although it is not her fault, even the treatment, which is not very pleasant, is finally satisfied and eats with appetite. Look how skinny she is. The dog is very brave, patient, smart and kind, behaves friendly with people, directly reaches out to them, because she has been so lacking in care all her life. 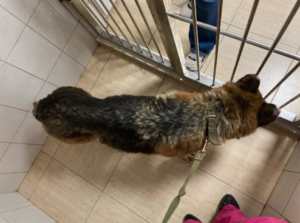 The hospital is warm and quiet. Of course, her health is bad, but Yara has a desire to live. Every day she expects our volunteers who will definitely come, bring delicious food, take them for a walk, caress and say that everything will be fine. The veterinarians at the clinic are excellent and do everything they can. I really hope that they will be able to cope with her complex illness.