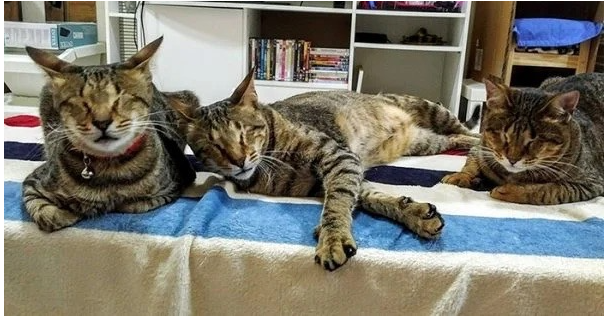 Eight years ago, three kittens were found in a warehouse in Bubai. The kids spent a long time alone and were very sick. The veterinarians put in a lot of effort to save the lives of the kittens and they succeeded, unfortunately, the infection deprived all three of the ability to see. 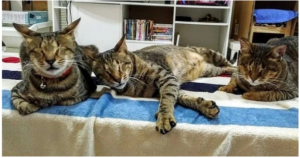 The kittens lived in a shelter, whose workers did not even hope that someone would want to give their blind wards a house. After a while, they managed to find a home for one of them, but soon the man returned the kitten, complaining that he was too lethargic. In the shelter, along with his brother and sister, this cat was very active and playful.
Veterinarians really did not find any diseases in the animal, suggesting that the cat simply could not survive the separation from his family. The shelter workers came to the conclusion that this trinity should not be separated, so the chances of finding the owners became less, because now they had to find people who would agree to three blind cats at once. 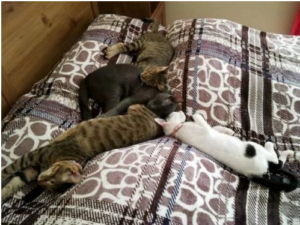 The ending of this story turned out to be very unusual — a year later, Katherine Magno found out about this trinity. The girl helped animals and many cats visited her house, but she never had blind pets. After learning the history of the cats, Katherine realized that she wanted to help them. The girl began by studying the rules for caring for blind cats and reading the reviews of quiet owners. Many stories scared the girl, but she was not one of those who easily deviate from what was planned.
As it turned out, Katherine was needlessly worried. Three cats very quickly adapted to life in a new house, they made friends with other pets, and also fell in love with their new mistress. Cats are very affectionate and active, over time they have studied the house and easily navigate it.