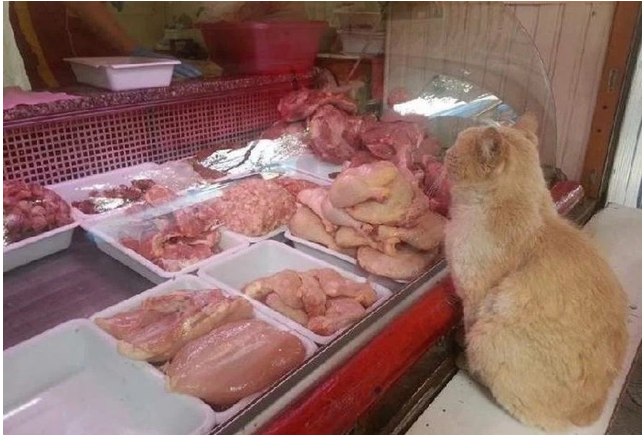 On one of the working days, a ginger cat appeared in the butcher’s shop. The animal sat opposite the counter and carefully studied the assortment, not at all worrying about what sellers and buyers think about it. The saleswoman decided to act decisively, because red cats are known for their impudence. The woman was very surprised when the next day the cat reappeared in the store. The saleswoman took pity on the animal and treated it to a small piece of meat. Surprisingly, the cat did not immediately eat the treat, but grabbed it and left the store. The woman decided that the animal went to eat in a quiet place, away from people. 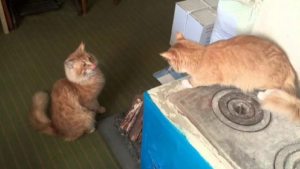 The cat began to appear daily in the store, the saleswoman was waiting for his arrival and each time she treated the animal to something tasty. Each time, having received a treat, the cat did not eat it, but took it to a secluded place, as the saleswoman believed. One day, the cat came in the middle of the day, when the saleswoman was just handing over her shift. Having treated her new friend with something delicious, the woman decided to see where he went to eat and quietly went after the animal.

The cat left the crowded street and stopped at a stone slab in a wasteland. Under the stove sat another cat, also red. One of the paws of the animal was severely twisted, so at first glance it was clear that the cat was sick and unable to move. It turned out that the cat came to the store every day and asked for food not for himself, but for his wounded friend, who could not get his own food on his own. The devotion of the animal to its relative touched the woman, and she decided to help the animals.
A woman took a cat with a crippled paw to a shelter, where he immediately fell into the hands of veterinarians. 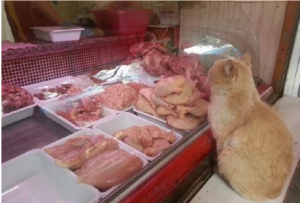 The injury turned out to be serious, so the treatment was not easy. After making sure that the cat was being helped, the woman returned back to the wasteland and took the second cat to her home. A couple of days later, the woman reappeared at the shelter to inquire about the health of the cat she had brought. It turned out that the cat had already undergone several operations and in the future he needed only love and care. The woman took the cat from the shelter, because she had no idea how to separate such devoted friends.