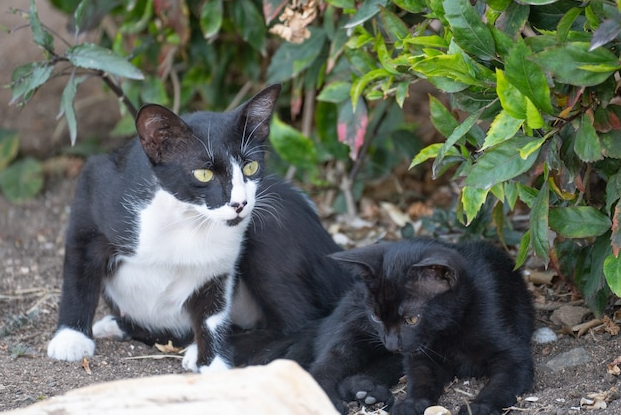 Residents of a small American city have witnessed an unusual situation. A cat and a kitten appeared at one of the local establishments. Immediately, the visitors did not even pay attention to the animals, the kitten tried to stay near the mother, like many kids at his age, but then the visitors looked closely and noticed that the animals were too close to each other. 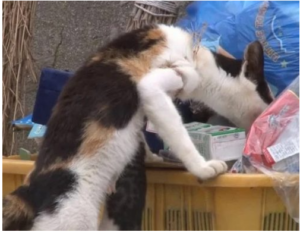 When people approached the cat and her baby closer, it became clear that they were not just keeping close to each other — the animals were connected with each other with a rope. When the cat tried to find food in the garbage, the kitten was forced to hang in the air. Noticing that people were looking at them, the cat became frightened and began to run away.
The cat ran fast, the kid simply did not keep up with her, so he was forced to literally drag along the ground. Passers-by who saw this scene thought that the cats were tied together as a cruel joke. Some of the passers-by followed the animals, trying not to draw their attention. The cat led them to a secluded place where there was a box containing several more of her babies.
As it turned out, no one tied the kitten to the cat on purpose, they just lived in a warehouse where there were old nets and ropes, therefore, most likely, the animals were tied up by accident when they crawled around the warehouse. People wanted to help the mother and her baby to free themselves, but the cat was not given in their hands. When the cat ran away, the baby was forced to drag along the ground, so people stopped trying to catch them, afraid that the kitten might accidentally get hurt in the process. After a while, the baby was able to independently free himself from the fetters that connected him with his mother. 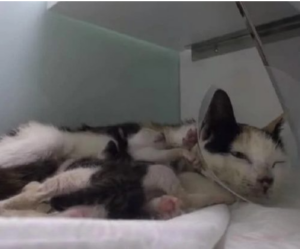 People decided to help the animals and contacted the volunteers, who nevertheless managed to catch the cat and her babies, after which they took the animals to the veterinarian. Doctors examined and prescribed treatment, after which the family ended up in a shelter. Now volunteers are looking for new owners for the kittens and their mother.

Observation of passers-by helped to save not only a kitten attached to its mother, but the entire cat family.