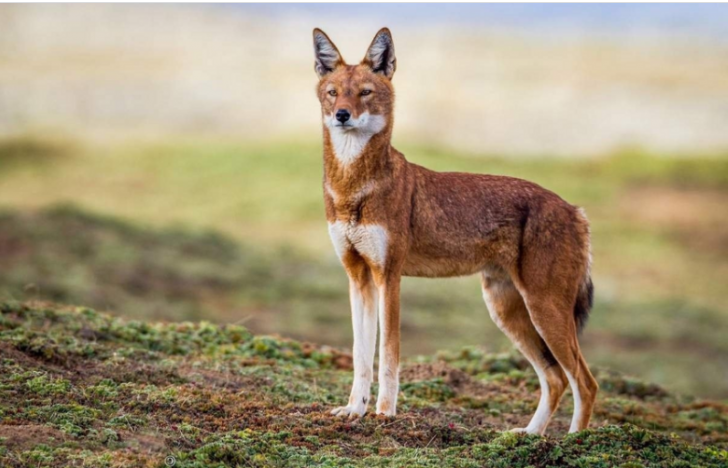 Gourmetism in nature is not uncommon. Many animals of high culture have changed the varied menu and have chosen their favorite delicacy.
But such preferences put them in an uncomfortable position, because their favorite dish may end, and then the aesthete will only have to starve. Pickiness can put an animal on the brink of extinction, which happened to the Ethiopian wolf!
What can I say, it really looks like an esthete. 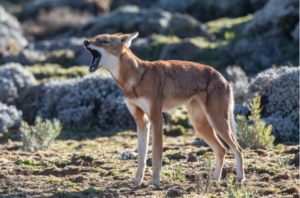 Capricious top registered in the mountains of Ethiopia. These places are called the African Alps. It is full of meadows and slopes, overgrown with low grass and shrubs — for our wolf, the most native territories. Outside of them, he is nowhere else to be found, and in the mountains themselves, his possessions are divided into seven unconnected pieces. But there’s nothing you can do about it, because there are only pitiful hundreds of wolves left. This is one of the rarest canine species.
The editor of the article yelled about the same as this wolf when semolina was brought to him in the garden. Ugh. 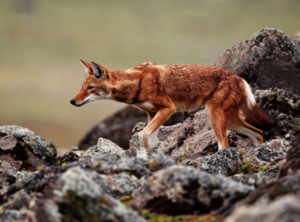 This development of events of the Ethiopian wolf led to his gastronomic fastidiousness. His lean, rusty-red body, long muzzle and large ears were intended for the prey of a very specific provision — mountain rodents.
If you don’t know that this is happening in Africa, and in the photo there is an Ethiopian wolf, it would be possible with a pure soul to assume that we have a successfully hunted fox in front of us. 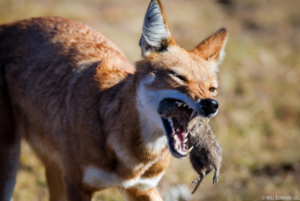 In addition to them, the wolf eats almost nothing — more than 90% of all bitten barrels are African mole rats, rats and mice. On such grubs, the wolf even deflated a little in comparison with its ancestors and became like a jackal — an adult animal is no more than 16 kilos and a meter tall.
Who are you calling a jackal, you stooping dog?! 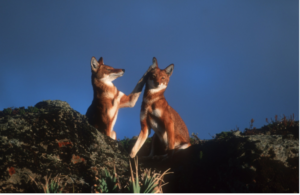 For the sake of their favorite food, wolves even began to hunt differently. Packed predators turned into loners. But they still lack feline patience: the wolves do not wait and do not ambush, but chase rodents over the mountains and slopes. And if the prey has time to hide in a hole, it will only delay the inevitable — the Ethiopian wolves will simply dig it out.
The same person who gnaws kirieshki under your ear in the cinema. 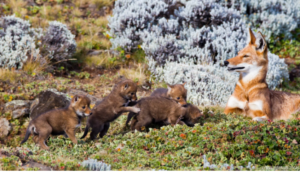 But the spirit of collectivism did not completely disappear from the wolves. They live in fairly large flocks — up to 20 individuals. In the group there is a clear division into rulers and subordinates. Alphas make up about a third of the entire gang. Such a status is held by wolves not by the right of the strong, but by the right of birth. And if the guys can still somehow move up the career ladder, then the ladies cannot improve their position. Even after the death of one of the leaders, power often passes from father to son or from mother to daughter.
Unique footage of initiation into alpha.

The main bonus of the alpha position is the ability to make kids. But even among them, it is available only to one male and one female. This process takes place only once a year — from August to November. There is no need to talk about fidelity to your status spouse. Wolves of both sexes are not averse to going left to the neighboring pack — for the good of the pack, of course. The genes need to be updated.
They look to the left and do not hide it a bit.

Two months after such trips, puppies appear. And not just anywhere, but in a specially equipped hole. The whole flock will look after these kids. Although subordinates are not allowed to breed, they can babysit as much as they like. After 3 months, the cubs will already stop sucking milk from their mother and nannies and will switch to meat. But they will become a full-fledged cell of a wolf society only by 2 years. By that time, the males will take leadership and subordinate positions, and most of the females will leave their native flock to cling to someone else’s. All for the sake of mixing genes.
Some non-dominant females, when they become pregnant, most often abandon their pups and only care for the alpha pups.

Ethiopian wolves are damn close to extinction. There are several hundred of them left, but they are also scattered in groups over different mountain ranges without the possibility of intersecting. The development of sheep breeding in the foothills has squeezed the animals to higher peaks, and with their fastidiousness it is even more difficult to survive there.