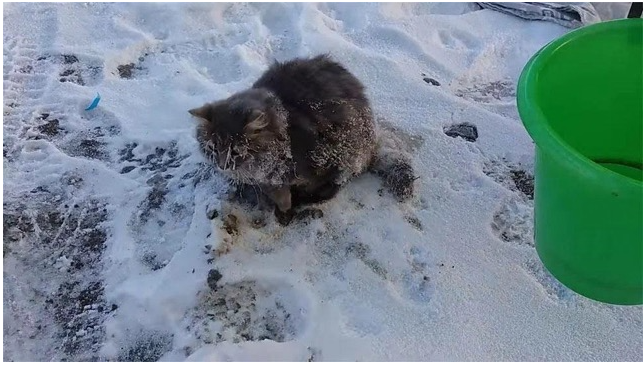 Serey from Zlatoust, in this city there are severe frosts in winter, to which the locals are already accustomed. On a winter evening, a man left the car in the yard. In the morning, before driving to work, he gently tapped the hood and checked under the bottom of the car. The fact is that in winter, stray cats hide under a car or even in it, near a warm engine, to hide from the cold, so before each trip, the man repeated such a ritual.

This time, a cat was indeed hiding under the car. Seeing the man, the tramp tried to run away, but he did not succeed, because the cat’s hair froze to the asphalt. When Sergei parked the car, the engine radiated heat and the kitten hid under the car to keep warm. From the warm engine, the ice under the car melted, but then the cold again turned the water into ice, immobilizing at the same time the cat, whose paws and tail were firmly attached to the asphalt. It was impossible to get the cat out from under the car without harming it.

Sergey carefully drove the car aside, and after that he began to save the cat. It was impossible to free the animal from the ice, so the man turned to his girlfriend Elena for help. The woman went down into the yard and warmed the water. With the help of water, the steam began to gradually melt the ice, freeing the cat. All this time, the animal did not move and did not cry, not at all protesting against the manipulations carried out by its rescuers. 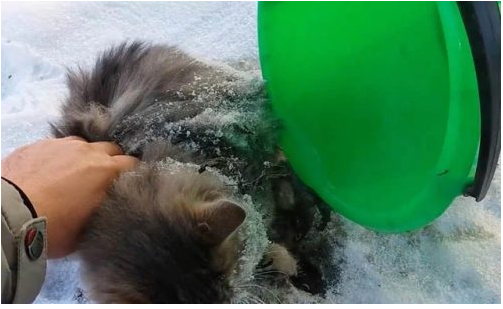 When the baby was finally free, and Sergey and Elena immediately took her to the apartment, and also called the veterinarian to come and examine the animal. The doctor concluded that the cat was healthy, because the long and warm coat protected her from frostbite. For prevention, the veterinarian nevertheless gave an injection, and the doctor also determined that this was a girl about 8 months old. 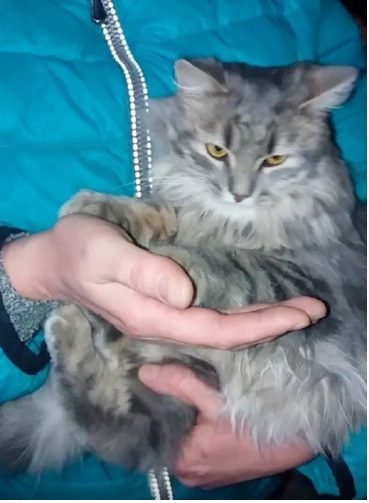 After a few hours, the cat warmed up and came to her senses, she immediately began to explore the apartment. In a couple of days, Sergey and Elena managed to find a house and a hostess for the cat. The baby began a new life, in which she is loved and treated kindly, she is no longer afraid of either hunger or cold.