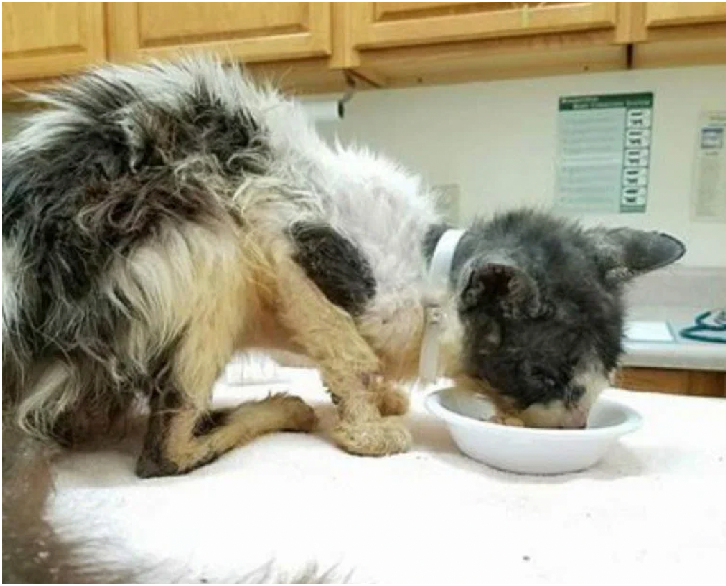 Cat Samuel was brought to the veterinarians in a carrier. Having opened it, the doctors were surprised at the condition of the animal. The cat could hardly stand on its paws, was weak and thin, in addition, he had many different diseases. The vets found that the carrier had been the cat’s home for the past two years.

The results of the examination of the cat were sad, veterinarians have not encountered so many diseases in one animal for a long time. The doctors believed that the only option for Samuil could only be euthanized, but one of their colleagues did not agree with this decision and decided to fight for the cat. Leslie took care of the animal and saved his life.
Leslie says she wasn’t sure she could do it, but she did her best to help. It turned out to be much easier to defeat Samuel’s physical illnesses than to overcome the depression in which the animal found itself. Samuel was afraid of people, barely seeing that someone was approaching him, he closed his eyes and quietly wept in horror. 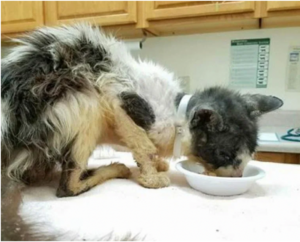 Leslie treated Samuel using her own savings. Her struggle seemed hopeless, because as soon as she overcame one problem, another immediately arose. Simultaneously with the treatment, the attention that Leslie paid to her ward also bore fruit: Samuel began to be less afraid of people and even show interest in what surrounds him. The treatment took more than one month, but Leslie managed to radically change the cat’s life. 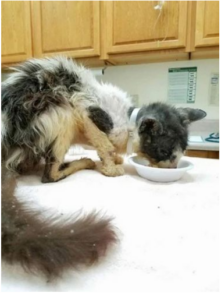 After Samuel got better, Leslie started looking for owners for him, which also turned out to be a difficult task. Samuel grew up and got stronger, he became bigger and more beautiful, but many of his illnesses remained, which means that he needed special care. Finding someone to help the cat find happiness was very difficult, but Leslie coped with this task.
Samuel now lives with Brian Smith, who learned about the cat and his story from social media. Having barely read the story of Samuel to the end, the man decided that he would take him to him. The cat immediately felt kindness in Brian, so he fell in love with him unconditionally and, on the way to his new home, was sitting in the arms of a man.